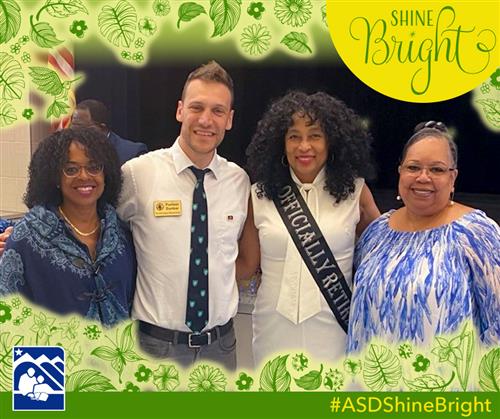 The celebration took place on June 18 at Clark Middle School.

“Cessilye lives and breathes for her students,” said Bellamy.  “Before she became a middle school principal, she was an amazing middle school counselor!  In both capacities, she was a unapologetic champion for students and provided the environment for excellence in personal development and learning.”

Bellamy said she had the privilege of hiring Cessilye as a counselor at Wendler Middle School. “We worked together for about eight years, then I convinced her she needed to become a principal, Bellamy said. “It was one of the best recommendations I ever made.”

Throughout her profession, Williams maintained a commitment to professional development and built upon her leadership skills.

“Cessilye has demonstrated strength of character and expertise as an educator and as a leader, “ said ASD Middle School Director Joe Zawodny.  “These qualities have ensured that her students were provided a strong academic program with individual needs and interests in mind.  Her staff have benefited from clear, relevant guidance and a superior support program in order to evolve with the changing educational landscape.  Her community has been welcomed into the school to celebrate student success and grow in their connection to one another.

Zawodny went on to say that to highlight any one achievement over the last thirty years is to minimize the countless ways that the Clark community and the ASD as a whole have benefited from Cessilye’s steadfast leadership.

“Cessilye will be missed by her students, staff, and families.  Thankfully, a solid academic and social foundation has been laid so that her school will continue to thrive for years to come.”

A summary of William’s training, awards, and community service projects are as follows:

NCAAP Educator of the Year Award

NAACP – National Association for the Advancement of Colored People

Board Member of the Mt. View Land Trust

GEAR UP Coordinator for the State of Alaska  7 years

Congratulations on your retirement, Principal Williams!