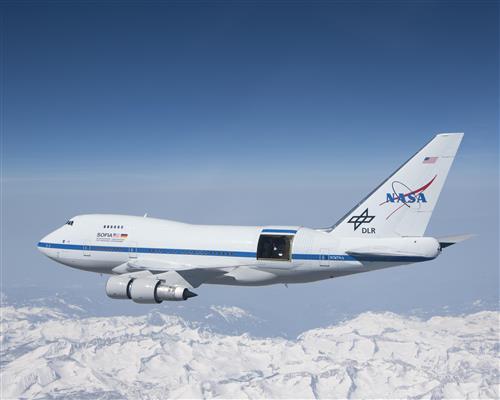 Driving around town, odds are good that popular space-themed songs will be on the radio station – such as David Bowie’s “Space Oddity” and Elton John’s “Rocket Man. Imagining yourself as an astronaut is a dream for most, but two Anchorage School District middle school science teachers will get closer to that dream than ever before.

Goldenview Middle School science teacher Erin Schneider and Clark Middle School science teacher Jason Patterson were selected in a competitive process by NASA and the Search for Extraterrestrial Intelligence Institute (SETI) to be Airborne Astronomy Ambassadors. Both will receive a suite of professional development opportunities for the 2021-2022 school year and a rare trip with NASA astronomers onboard the Stratospheric Observatory for Infrared Astronomy (SOFIA) aircraft, where they will accompany 28 teachers across nine states.

The once-in-a-lifetime trip takes passengers 45,000 feet high into the stratosphere – enough to escape 99% of Earth’s infrared-blocking atmosphere, allowing astronomers to study the solar system in ways that aren’t possible with ground-based telescopes. “It’s exciting to get to be part of that [space] exploration – to experience it firsthand!” said Schneider. 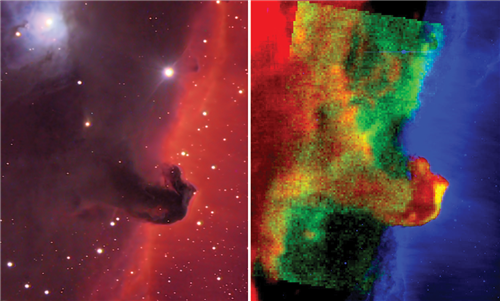 Visible (left) and infrared (right) images of the Horsehead Nebula. The dust that forms the Horsehead blocks visible light but glows brightly in the infrared. The infrared image, taken by SOFIA’s upGREAT instrument, shows carbon monoxide molecules sheltered in the dense nebula (red area) and carbon atoms and ions that have been affected by the radiation from nearby stars (green area). (Credits: left: Dylan O’Donnell; Right: NASA/SOFIA/J. Bally et. al)

Airborne Astronomy Aambassadors are a sought-after position, so Schneider jumped at the opportunity and submitted her application just before the deadline. Three weeks later, she received the good news and couldn’t keep it to herself.

“The email came Sunday night and I screamed, startling my family,” Schneider said. “I may have done a happy-dance throughout my house too. Since we had to keep it quiet [until the formal NASA/SETI announcement], only my kids and husband knew.”

Patterson applied the night before the deadline too, but for a different reason. “I was slightly reluctant to add more to my plate, but when I learned I was accepted, all my worries just dissolved into oblivion!” he explained.

STEM Science Curriculum Coordinator Dr. Jennifer Witter encouraged both teachers to toss their hats into the ring. Last year, the program was only open to high school teachers and four were elected from the District. “This is a big deal, because it is a very competitive process from a nationwide pool of applicants, and the selection panel is an independent panel from NASA.”

The application process was more than just submitting a name and email address. A homework assignment was a part of it, and it wasn’t a walk in the park, explained Patterson. “The essay questions were tough, but very relevant to the changes within science education. I answered using my experience implementing change within the ASD school system.”

Being an Airborne Astronomy Ambassador is a thrill for teachers, but the project is ultimately meant to enhance student STEM engagement and achievement via teacher professional development. “Our secondary science teachers are very committed to hands on learning, and in particular, the idea of applied engineering and problem-solving that’s a hallmark of NASA/SETI science and space travel,” said Witter.

ASD middle school science teachers Erin Schneider and Jason Patterson helped co-write Destination Mars, an eigth grade energeering design project, where students learned what it takes to set up a manned based on Mars, and apply learned principals from their science course to solve problems. After a successful pilot launch in their classrooms and a school-wide competition at Goldenview, a Districewide competition is the future goal. (Courtesy of Erin Schneider)

Getting students excited about science, technology, engineering, and math is the name of the game for Schneider and Patterson – who both challenge their students in unique ways. Schneider stressed the importance of doing as many labs as possible through a variety of STEM challenges during the school year. “Together we work on critical and systems thinking skills. I strive to foster a sense of wonder, curiosity, and the love of science.” Patterson had similar views and believes students learn the most by hands-on learning. “I strive to implement project-based learning into every unit. I know that students are individuals with [different] learning styles, and that is why I give them a chance to demonstrate knowledge in multiple ways.” 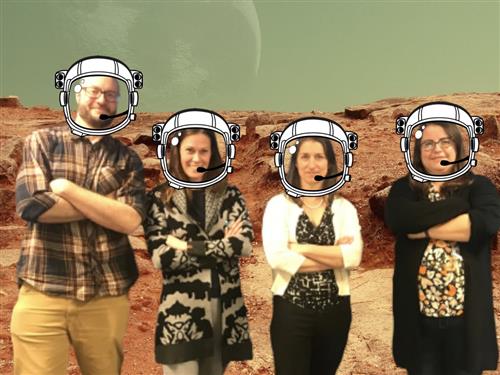 Patterson jokingly said he’s always wanted to be an astronaut, and while he may not listen to Elton John’s “Rocket Man” onboard the SOFIA, this is the closest he’ll likely get to the stars. Dr. Sally Ride, the first American woman in space said it aptly when describing her views while in orbit, “The stars don’t look bigger, but they do look brighter.”