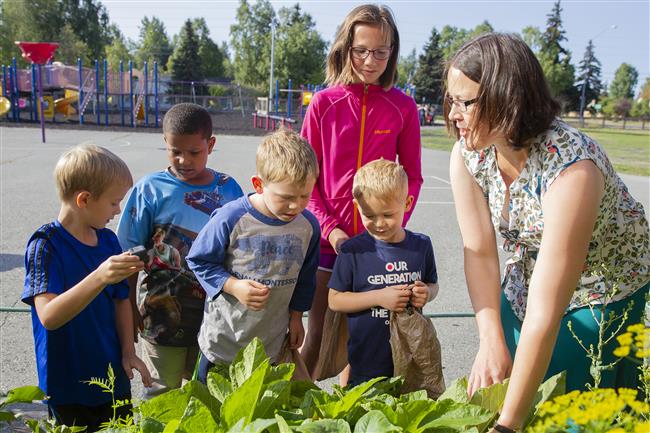 Using a garden to grow community outreach and global citizenship was an easy decision for Denali Montessori Principal Ruth Dene - a plant-based education that starts at the roots and grows strong.

“This fits right in with the philosophy and the mission of Denali Montessori, and that is global citizenry—giving back to the community and also the environment,” said Principal Ruth Dene as she watched several students harvest vegetables Thursday afternoon in the school's garden.

Dene said that gardening is a large part of the Montessori program. The program is funded by Rotary Clubs of Anchorage. They funded and built the frames, soil, and plants. Denali Montessori families and staff helped install them in the spring and have maintained them over the summer.

Dene said from there, families signed up to help water, weed, harvest, and deliver the vegetables to The Children’s Lunchbox. “It was a perfect marriage of the Rotary Clubs of Alaska, Children's Lunchbox, and Denali Montessori School.”

The Children’s Lunchbox is a program through Bean’s Café that provides meals to hungry children. They operate through an after-school meal program, a weekend food program, and a summer food program. 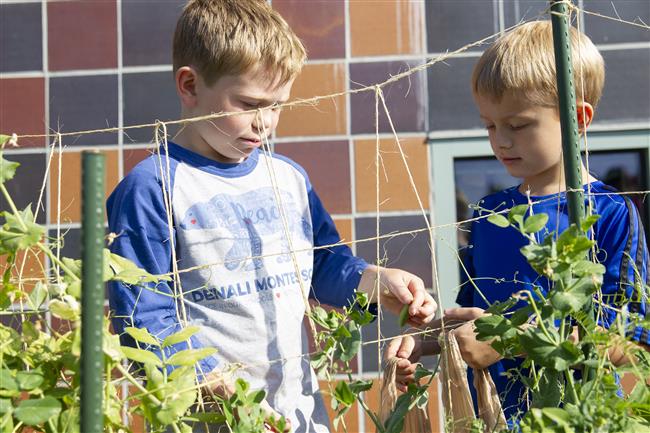 The school garden project started the last week of the 2018-19 school year said Dene. The school-wide project  will continue through the start of this school year.

Dene explains that Jessica Sharp, kindergarten teaching assistant and Denali Montessori parent, led the charge as the master gardener and team leader. “She has professional expertise in gardening.”

The hope, ventured Dene, is to have somewhere around 50 pounds of harvested vegetables when we are done.

According to Jessica Sharp, students, families, and staff planted several different vegetables. “We have some herbs, a little bit of berries, carrots, kale, potatoes, peas, lettuce, pumpkins and cabbages. We just have a variety of different things that grow well in Alaska and also a lot of things that would be kid friendly”

The learning aspect of the garden is a great motivator too. Sharp said she thinks that teaching kids where their food comes from is important as well as teaching them how to plant and maintain the garden. 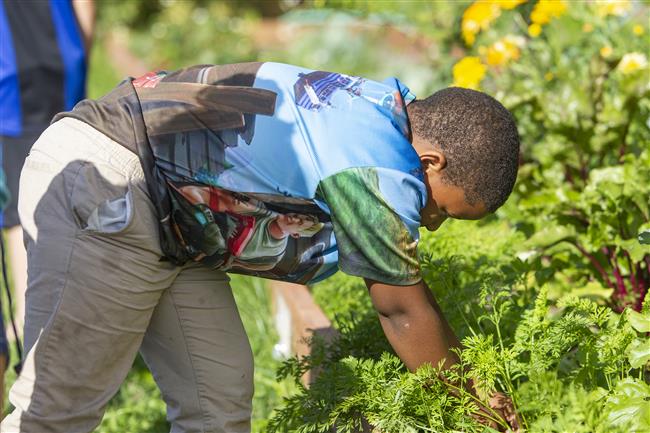 A Denali Montessori student harvests vegetables from the garden Thursday, August 8, 2019. The produce harvested will be donated to The Children's Lunchbox. (Robert DeBerry/ASD)

Sharp said that in the fall they would be digging up the potatoes which are in the kindergarten wing. “We're going to be using those potatoes with the kids, digging them up and letting them experience what that's all about, and probably weighing them and doing some science experiments.

According to Kalinda Kindle, Development and Event Officer for Bean’s Cafe and The Children’s Lunchbox, there are more than 60 garden beds at 10 different Anchorage School District schools.

Kindle said all the produce donated goes to The Children's Lunchbox to feed children during the summer program.

“Yesterday we made stir-fry full of vegetables from the garden,” she said. “The garden is a wonderful resource because it allows our nonprofit to save money on fresh produce while providing fresh, healthy, and locally grown vegetables.”

She said it is also an opportunity for community service for students. “It's so meaningful to see the kids come in with their parents to drop off their donations. This week an elementary school student dropped off a bag full of vegetables and with a big smile said, ‘I grew this to help feed kids!’”