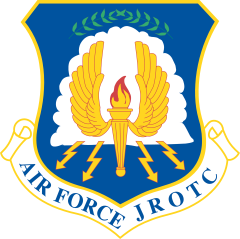 Skyler was one of 200 cadets selected for the program out of the 2,575 cadets in the nation that applied.

“This is a very cool award for this student who shows up to school every day with a positive attitude and works hard,” said Senior Master Sgt. Jeffrey Ullom, West High Air Force JROTC instructor.

There is a total of eight colleges in the Lower 48 that host selected cadets. In March, Smith will find out which college he will attend for the Academy.

Skyler has expressed interest in joining the Air Force when he graduates from high school and is interested in eventually becoming a military pilot. The program will certainly open a door for Skyler to achieve his dreams.

Skyler had been on multiple base tours where he heard directly from Air Force pilots and gained insight into what may ultimately be his own career piloting military planes.

“We have a competitive drill team which Skyler has been a part of the past two years,” Ullom boasts, “We participate in community service events – our unit had 1,800 hours last year, and we already have 1,400 hours this year—flag presentations at sporting events, the Military Ball, tours on JBER to include an orientation flight in an Army Guard Blackhawk helicopter and USAF C-17, as well as a summer leadership camp.”