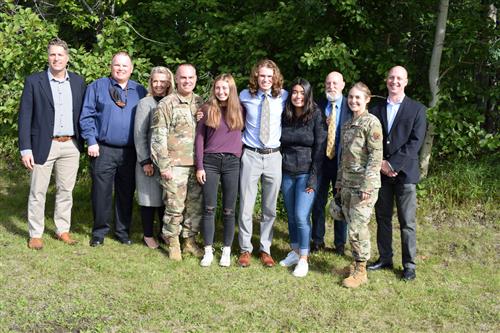 On Aug. 31, 2021, three West High School seniors in the final year of ASD’s Russian Immersion program collectively recited the Oath of Office during a swearing-in ceremony at the National Security Agency (NSA) training center on Joint Base Elmendorf-Richardson.

The NSA’s High School Work Study Program has existed for several decades almost exclusively out of itsheadquarters in Maryland.

NSA Alaska contacted the District prior to the coronavirus pandemic, hoping to develop a special localized program that took advantage of the Russian Immersion program and its proximity to the jointly run NSA-U.S. Airforce Alaska Mission Operations Center (AMOC).

2021 West High graduates Lauren Biggs and Jamey Roy were the first students to participate in this program during the impacted 2020-21 school year and paved the way forward for the 2021-22 student-cohort.

“I am so proud of all of our immersion students, and am happy we are able to have this partnership with the NSA," said West High School Principal Sven Gustafson. Athena, Sam, and Payton are amazing students and are going to gain so much through this language/work opportunity."

This highly competitive program is designed for high school students to gain school-sponsored work experience during their senior year.

Students receive a salary as part-time NSA employees, but also receive academic credits toward their high school diploma – with the added potential to transition to full-time employment.

While the specifics of their duties are classified, Clendaniel, Drews, and Smith will get real-life experience and high school credit working with NSA staff and Russian linguists to advance their own language skills.

NSA-Alaska’s Director of Operations Richard Marshall said the NSA has been extremely impressed with the quality of students from the ASD Russian Immersion program and how it benefits students.

“A key goal is to expose students to the potential meaningful career opportunities with NSA and the broader intelligence community – not only in Alaska. We’re eager to continue this partnership and offer this unique program,” said Marshall.

Graduates are able to consider a myriad of opportunities beyond the senior year work study program – such as college summer language internships across the United States.