Congratulations to our Retirees!

Congratulations to Scott Kniefel and Ardy Robertson, who are both retiring from the Anchorage School District this year. Mr. Kniefel has been with ASD for 24 years.  He is an English teacher, wrestling coach, and former student government sponsor.  He has used Canvas as a learning management system in his classroom for years, and his expertise was invaluable this quarter as all staff transitioned to online learning.  He hosted dozens of training sessions for his colleagues via Zoom and was always available for tech support.

Mrs. Ardy is a West High alumni and has spent 25 years teaching at West.  At a recent staff meeting via Zoom, Senator Mia Costello and Representative Matt Claman surprised Mrs. Ardy with an official legislative recognition. Here is the text of their proclamation:

The members of the Thirty-First Alaska State Legislature are pleased to recognize and honor Ardy Robertson as she retires from her teaching position at West High School after 25 years with the school.

Ardy Robertson has dedicated decades of her life to West High School and the Anchorage community. She graduated from West in 1990, before returning to the school to teach in 1995, which made her the youngest teacher in the Anchorage School District. Ardy’s list of accomplishments at West High School are numerous. She spent twelve years teaching the yearbook class and was named Jostens’ Yearbook Adviser of the Year for Alaska in both 2000 and 2005. Ardy also taught Spanish and English at West High for over a decade and led five different school trips to Mexico through her involvement with the Spanish Club.

Outside of the classroom, Ardy coached various West High teams, including JV girls soccer, wrestling cheerleading, and varsity girls hockey—leading the team to two hockey state championships. She also served as class advisor for the classes of 1998, 2000, 2002, 2004 and 2007, and as the senior events coordinator for eight years. Ardy volunteered dozens of weekend hours to judging when West hosted Drama, Debate and Forensic competitions and has been involved in a number of theatrical productions on the West High stage.

In addition to Ardy’s involvement at West High School, she has also invested much of her time within the Anchorage community. Ardy has volunteered countless hours before and after school to love, nurture, guide and mold our state’s youth toward making smarter, better choices for their lives.

One of Ardy’s favorite memories is when she and her husband Chip shared their first kiss on the dance floor of the 1988 homecoming dance at West High School. The two of them plan to maintain their permanent residence in the West High School district and continue to support and be involved in West High School activities.

The members of the Thirty-First Alaska State Legislature join the Anchorage and West High School community in recognizing Ardy Robertson upon her retirement as a teacher at West High School.

We wish both of these exceptional educators all the best.  It is certainly not the way either of them expected their careers to end, but they have stepped up and helped out in any way possible.  They will always be West High Eagles! 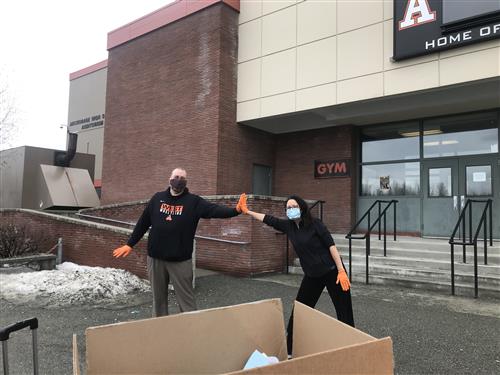